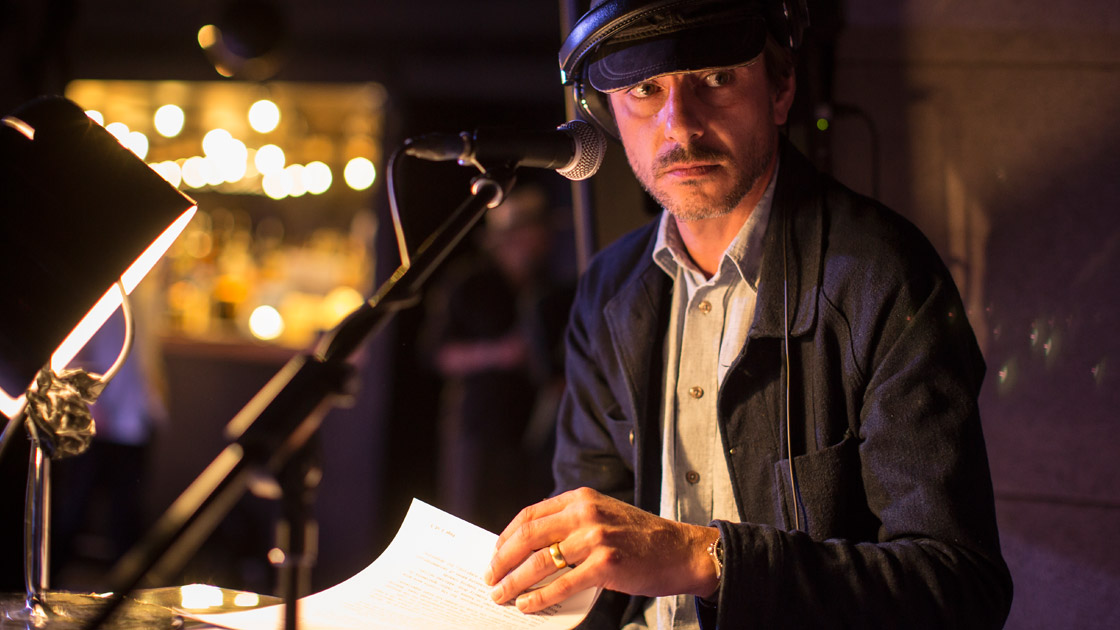 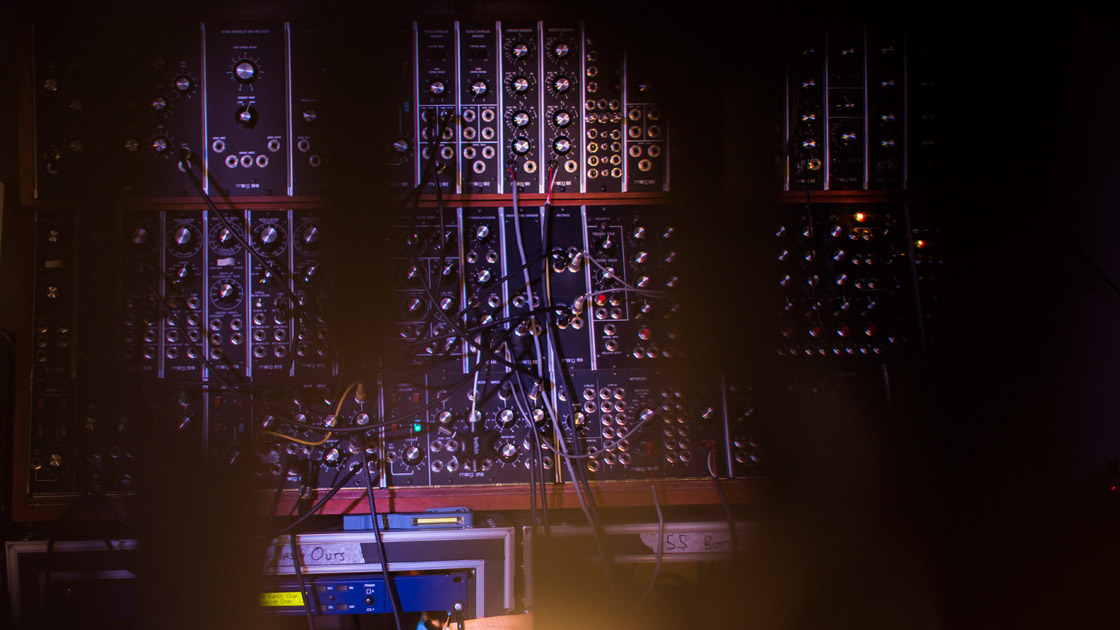 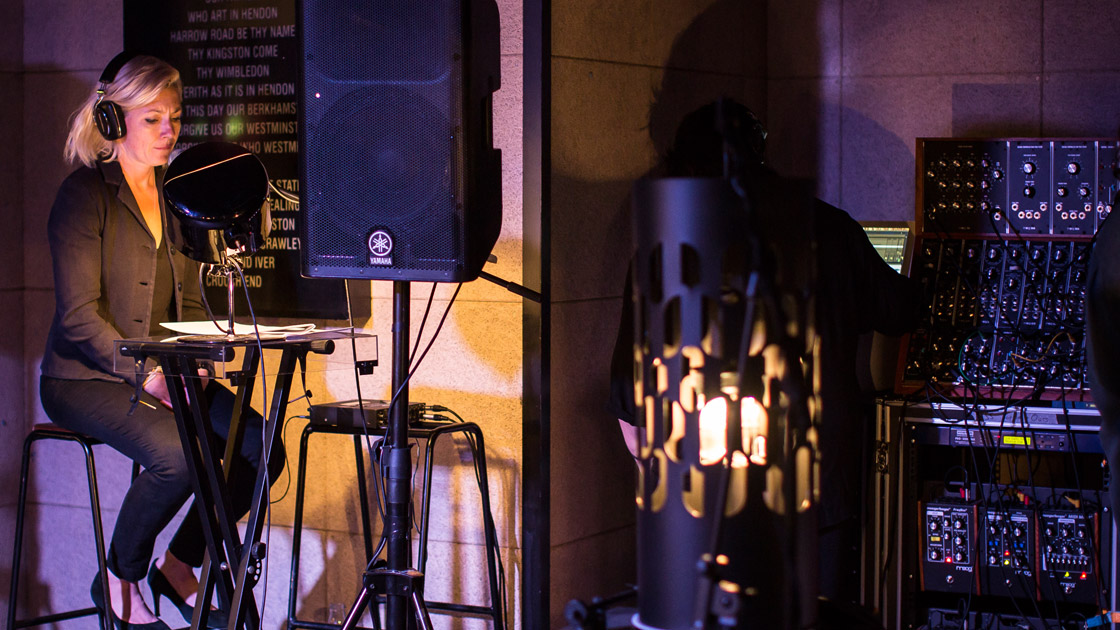 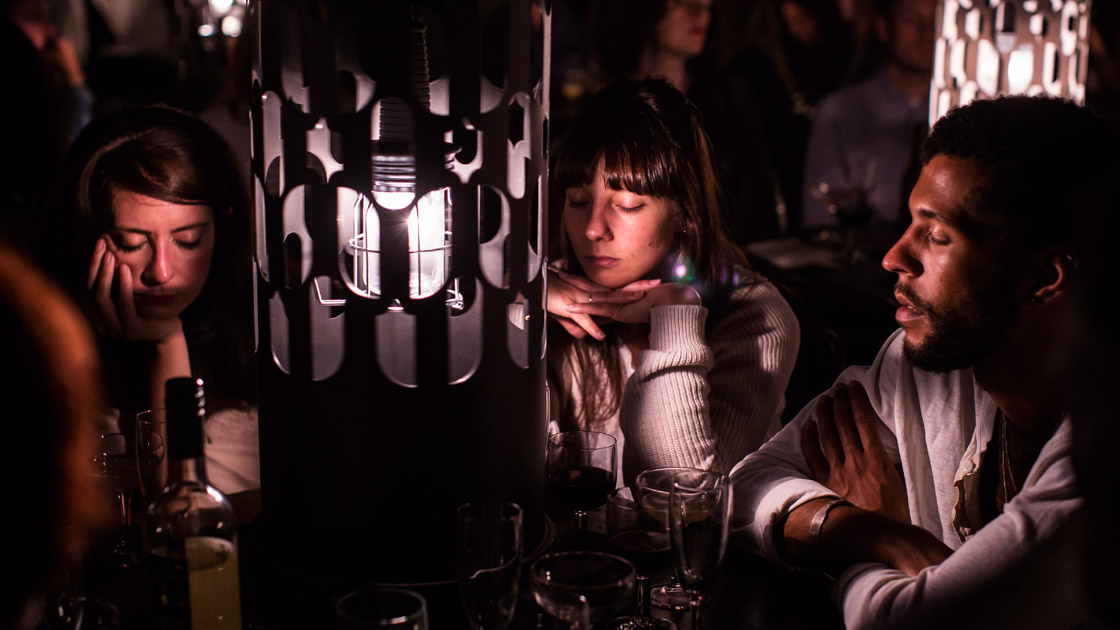 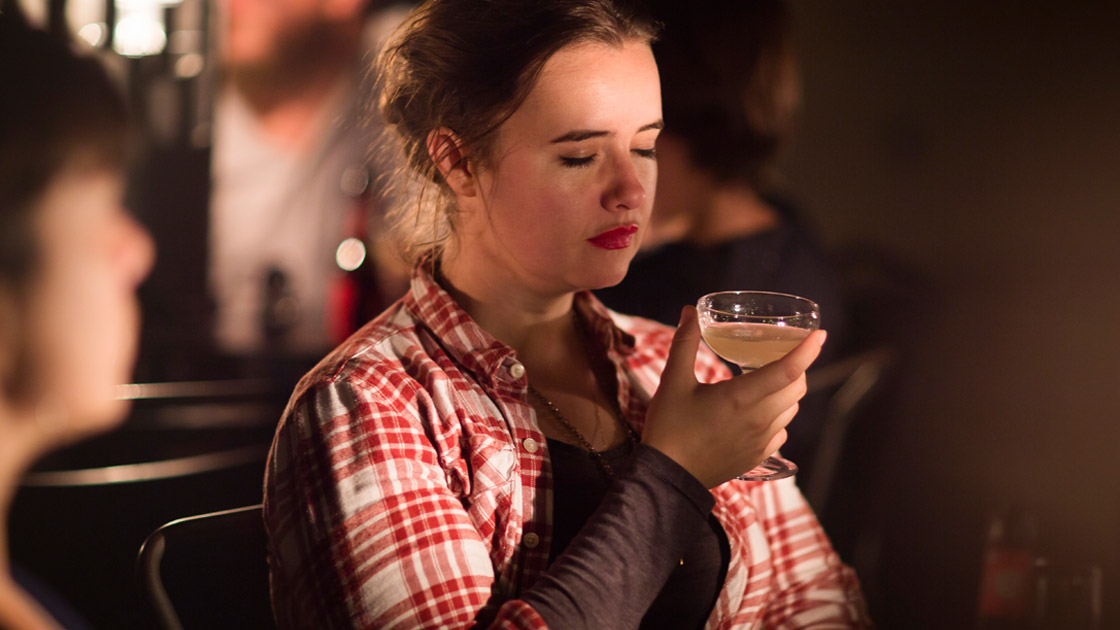 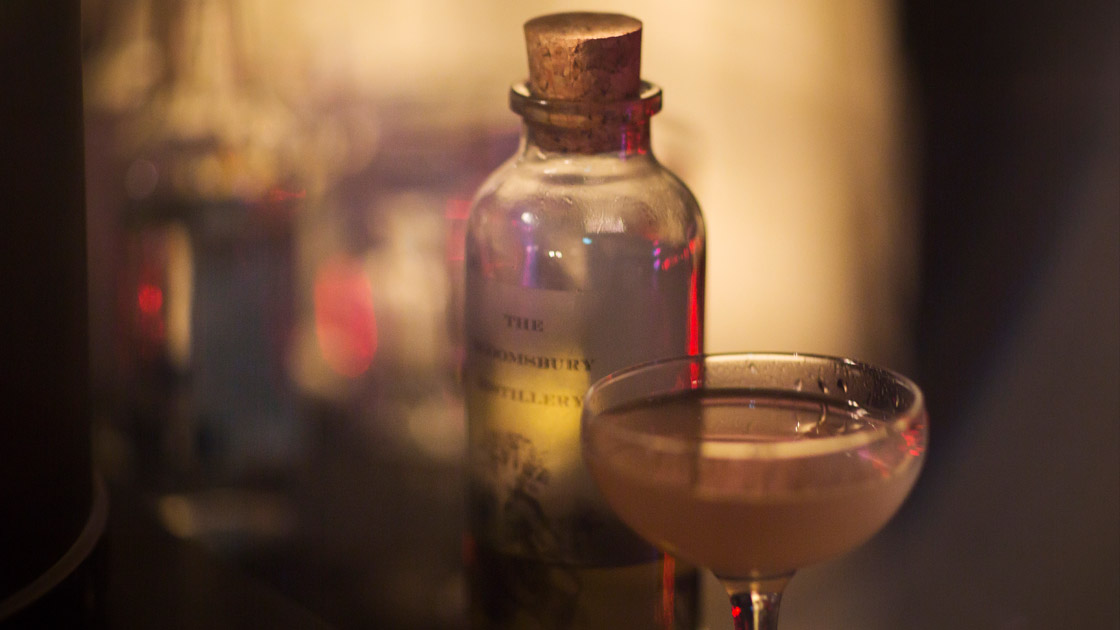 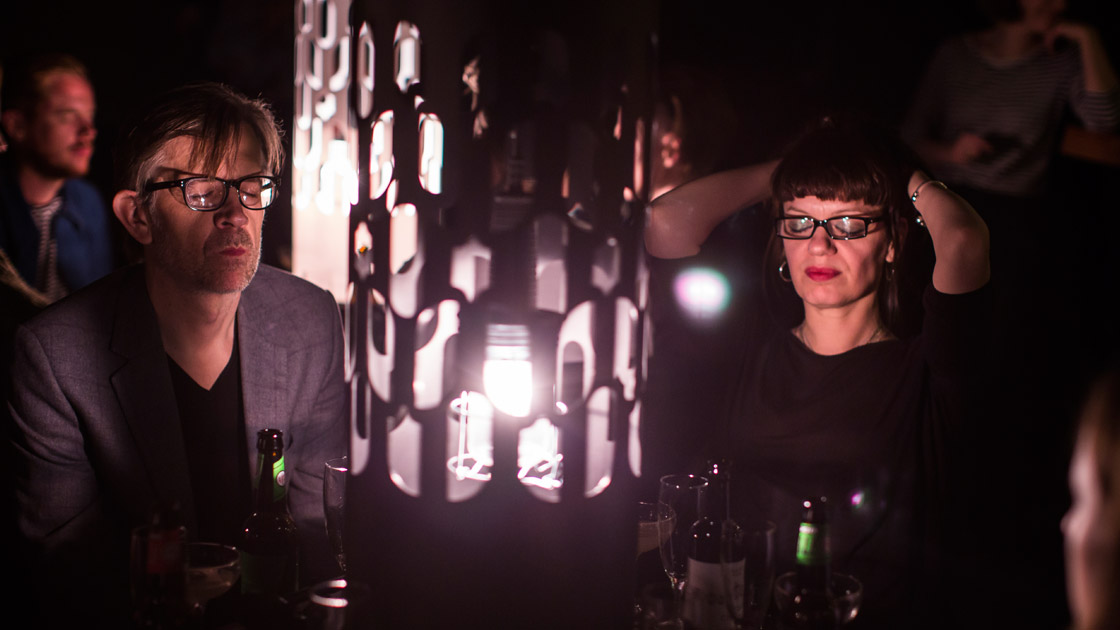 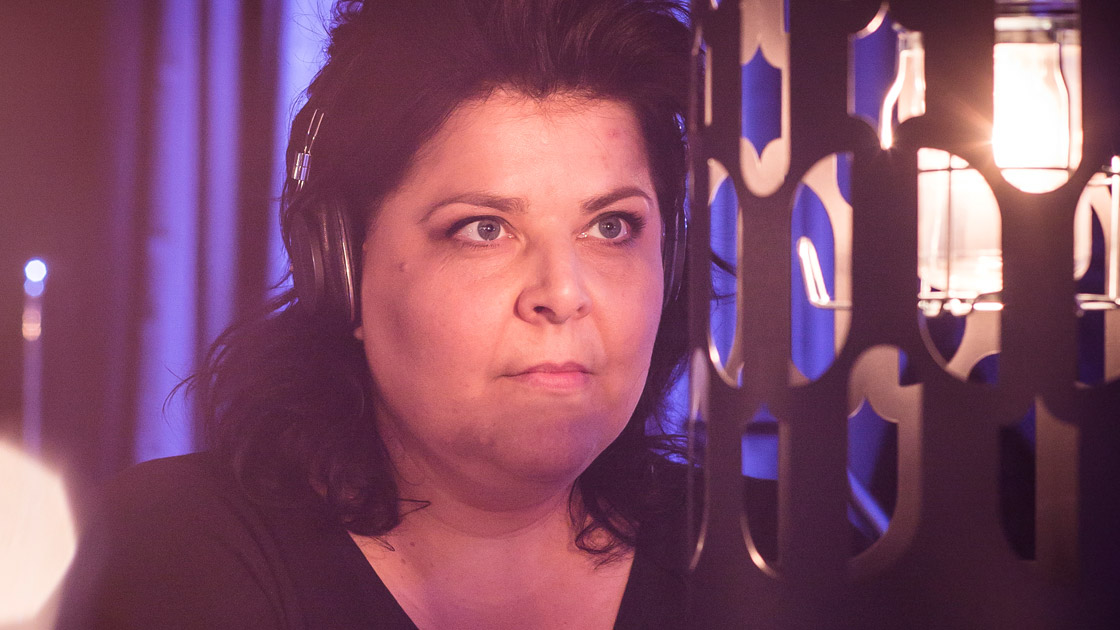 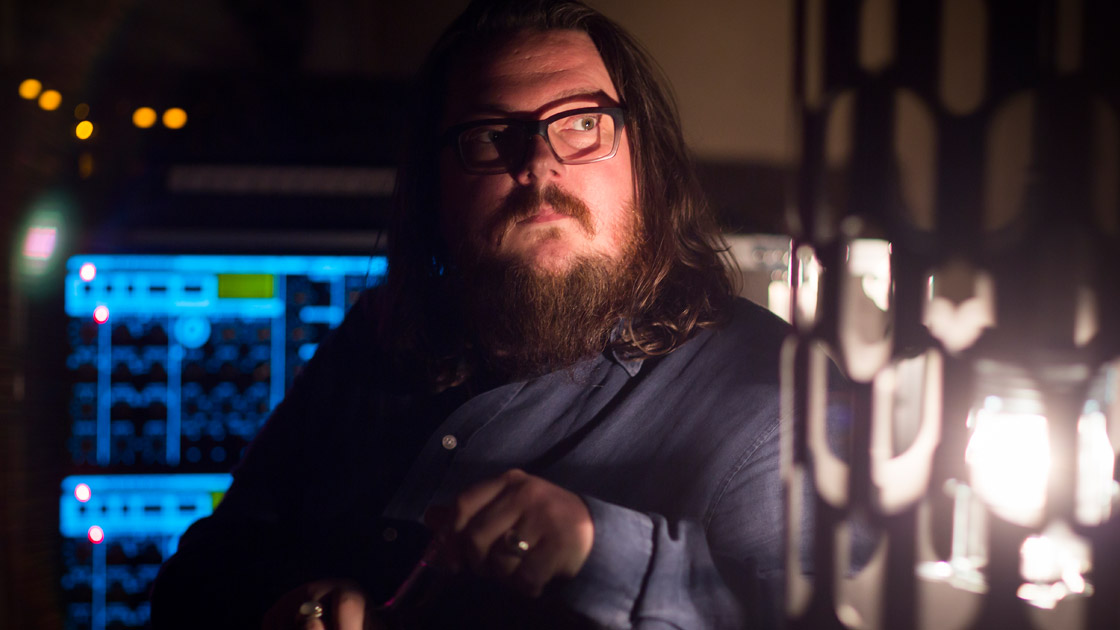 A Long Goodnight is the outcome of a four day residency in the Moog SoundLab at the Ace Hotel London. Iain Forsyth & Jane Pollard created this new work during their stay, resulting in a live performance on 17th August 2015 in the hotel’s live music venue, Miranda.

The project incorporates two specially commissioned short stories by Stuart Evers (author of Your Father Sends His Love), read by Enzo Cilenti and Kate Ashfield. Using the vintage Moog equipment in the SoundLab, Forsyth & Pollard created an electronic ‘score’ for the piece.

The work was made and designed to be experienced under the influence of Brion Gysin’s Dream Machine, a device described as “the only work of art you see with your eyes closed”. When the Dream Machine was turned on the audience were encouraged to sit close and view it with their eyes closed. The pulsating light alters the brain’s electrical oscillations by stimulating the optical nerve. The light flickers at a constant frequency that corresponds to alpha waves normally present in the human brain while relaxing.

A Long Goodnight was also a collaboration with Alan McQuillan of the Bloomsbury Distillery, who distilled a unique gin-based drink for the live performance. The spirit is a distillation of juniper, red chichona bark, kola nut, bitter and sweet orange peel, with vanilla and more. Half sweet seductive juniper, half bitter quinine pill. The combination of distilled and compounded botanicals produces the unusual yellow hue.

The Moog was a completely new type of instrument introduced to the world in 1964 by Dr. Robert Moog. It would go on to change the course of music history and influence decades of sound design. The SoundLab includes one of only two existing re-engineered classic 1970’s System 55 modular.

Guests attending the ACE HOTEL performance on 17th August 2015 were each given a letter of introduction and welcome by Iain Forsyth & Jane Pollard: 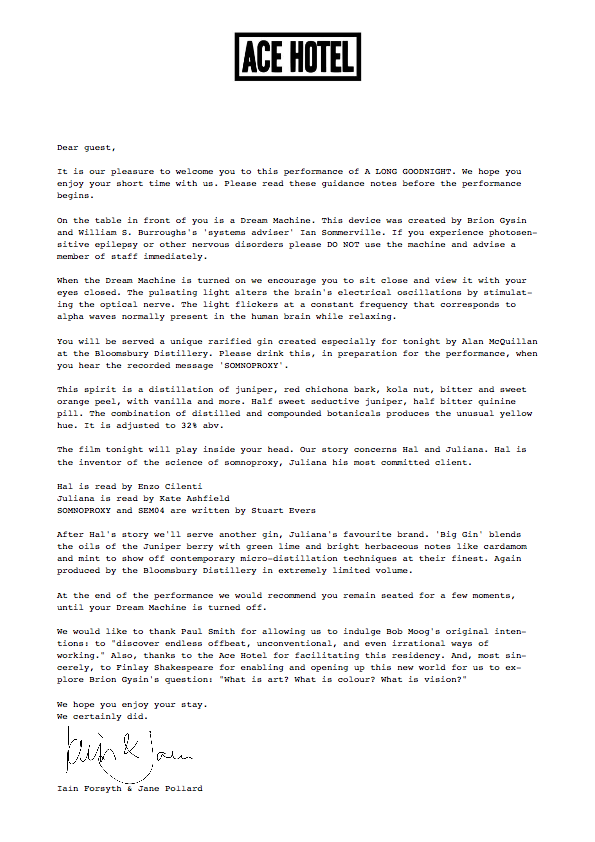